The week beginning 4th of August, the same day that was my birthday, the London fashion scene came ablazing.

Any fashion enthusiast with an eye for international fashion, especially Africa’s steadily rising fashion industry and worth their salt knew that the hottest place to be was Kesington Olympia on the 8th & 9th of that week.

London’s west end was graced by Africa’s finest designers. Both rising stars and veterans of the African fashion industry were at the venue to showcase their designs for all to see.

In it’s fourth year running, this year’s show was set to be bigger and better than its predecessors. The founder, Ronke Ademiluyi and her creative team definitely made sure of that; and it’s not surprising given that AFWL is one of the biggest events of its kind to exhibit African designers in Europe. I was opportune to see the works of brilliant designers such as Adama Paris, Jazz Effect Design, Porjai Thai Printer, Gkat Fashion, Monis Fashion, RAAAH, TIR Fashion House, Ade Bakare and many others.

Monis of Monis Fashion House and Lize (founder of Sewafolie)

Designer of Njema Helena and Lize (Founder of Sewafolie)

Arriving at the venue on Saturday the 9th, I was pleased by the well organised and seamless check in that led me from the entrance to the registration desk where I collected my press pass. Even more pleasantly surprising was the unlike African attitude to time keeping that the show’s organisers exhibited. It’s true that the fashion industry is notoriously not any better, more so that the phrase- fashionably late, is a stance to prance.

However, the show kept to time throughout the day, and we were briskly ushered out after the curtain call. Was it due to the venue’s policy? Maybe. But either way, it showed good management and effort on the AFWL’s team’s part. The day was divided into four shows- two in the afternoon (1PM & 3PM) and two in the evening (5.30PM & 7.30PM). While all this was going on, there were stalls on the circumference of the runway area with other exhibitors displayed their garments, clothing, jewelries, shoes and other accessories.

AFWL was truly an amazing event!

It being the first fashion show that I’ve attended, I wasn’t quite sure of what to expect (or what to wear!) and didn’t go with much of an idea to be honest. I left my mind blank in a determination to go there, see for myself and come to a genuine and no preconceived opinion.

I can truly say it was a wonderful experience and I can only hope for an even bigger and better show next year. As I write, it’s only been 24 hours since i returned home from the show and I’m already anticipating next year’s event.

No big show is complete without an awards ceremony right? Well, AFWL didn’t plan on being the first. After all, sparing a moment to appreciate the people, designers and companies that have been the most influential and instrumental to the success of the event is a sign of gratitude right? Yeah, I think so.

In the pic, Adaeze Yobo is wearing TIR Fashion design.

The second award was innovative designer of the year which was presented by Regina, the editor of New African Woman and awarded to Gkat Fashion.

The designers were emotional as we learnt that they couldn’t showcase their collection due to an airline losing their luggage at the airport. 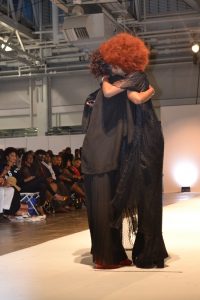 The third award was model of the year which was presented by the CEO of Fashion Finest to Tanya Beresford.

The fourth award was international designer of the year which was awarded to Adama Paris. Due to the designers acute shyness and refusal to walk down the runway for pictures, I was unfortunately unable to get a photograph of her.

The fifth award was the special recognition award for most supportive brand which was presented by Alabi to Daviva.

Also the performers for the day:

To see the brilliant designs from all the collections on the day, click here, here, here and here!