Stuck on what to dress up as for Halloween or don’t even know what to do for makeup? Rajane Kaur has got you sorted!

As you’ll see, to say she’s a dope makeup artist is an understatement. Using simple products and tools that can be easily obtained, she shows us how to transform into an alien princess.

Read on to find out how!

I love Halloweeeen! It’s one of my favourite times of the year and I’m always one of those people who gets a bit too ‘into it’. This year I’ve decided to go as an Alien Princess – I think it’s just an excuse to wear a crown and a lot of glitter. 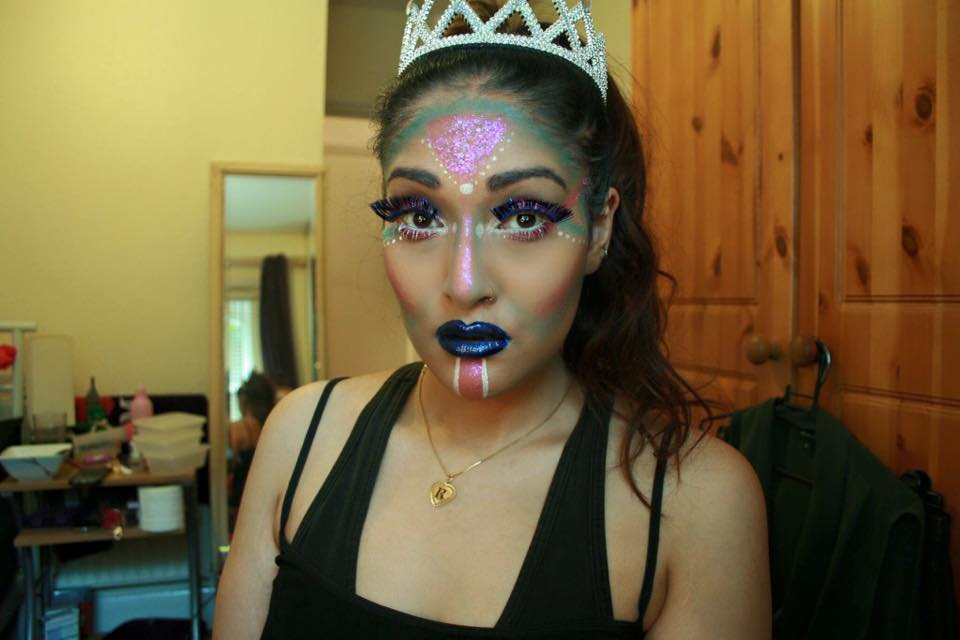 I decided to do a quick step by step tutorial of this look as it’s super easy and it’s all using eyeshadows and make up you can find easily. Prepare yourself for a lot of scrolling as I somehow took a million photos. 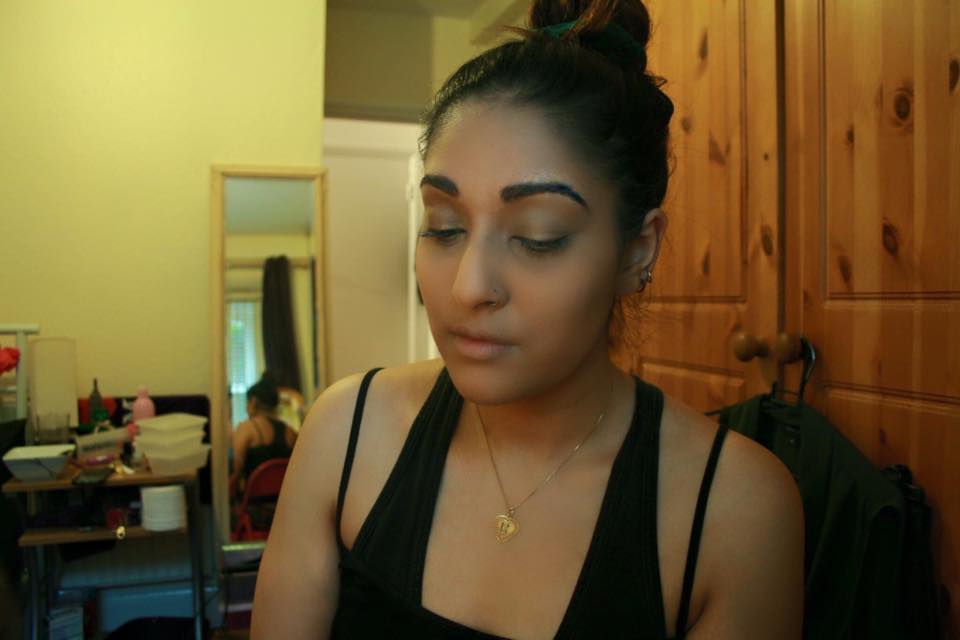 I started off with your average base of foundation and concealer. 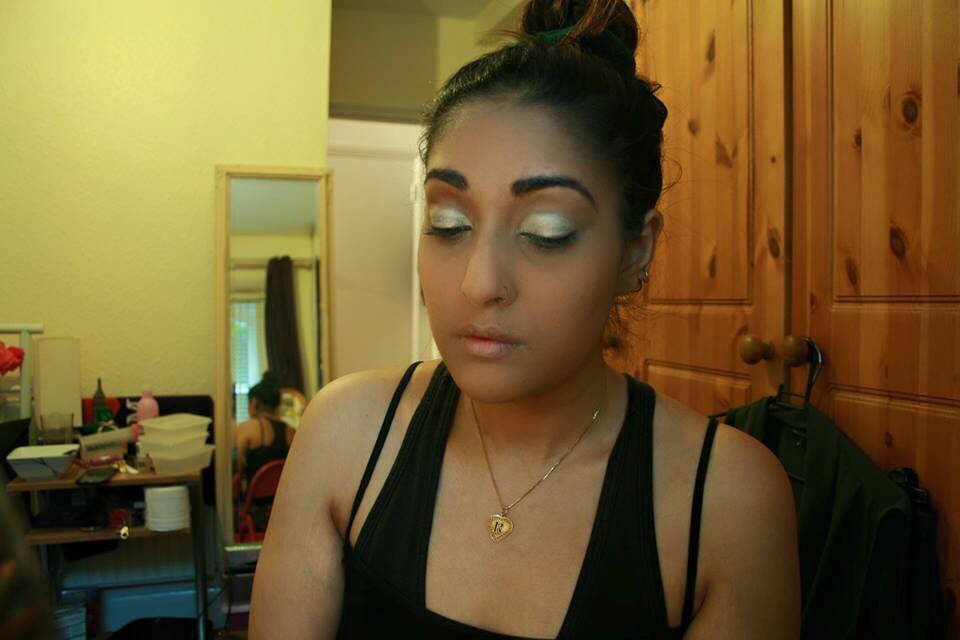 I then used the NYX Jumbo Eyshadow Pencil in Cottage Cheese all over my lid. I wanted a nice shimmery base that would really emphasise the coloured shadows I was planning on using. 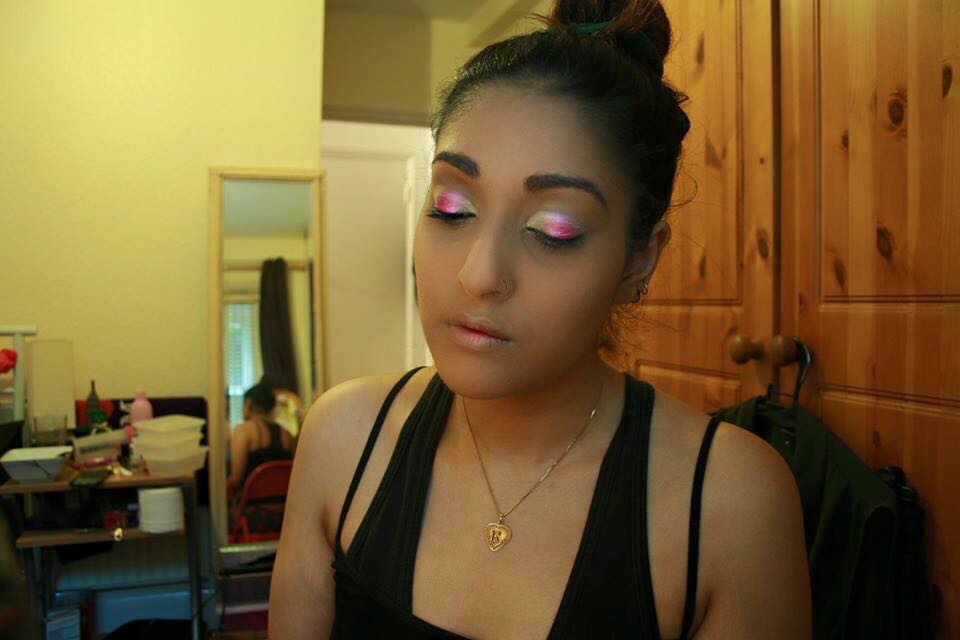 Next, I used a hot pink just on the lid – I started about halfway across my eyelid as I wanted the silvery base I had added to still be visible. 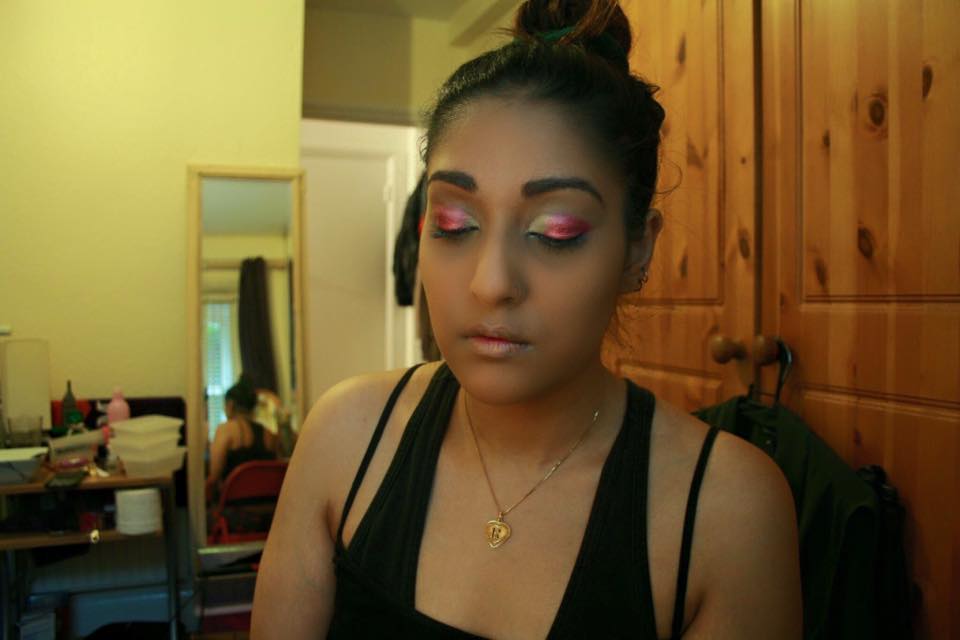 I intensified the colour by adding a slightly darker pink to the outer V and blending together. 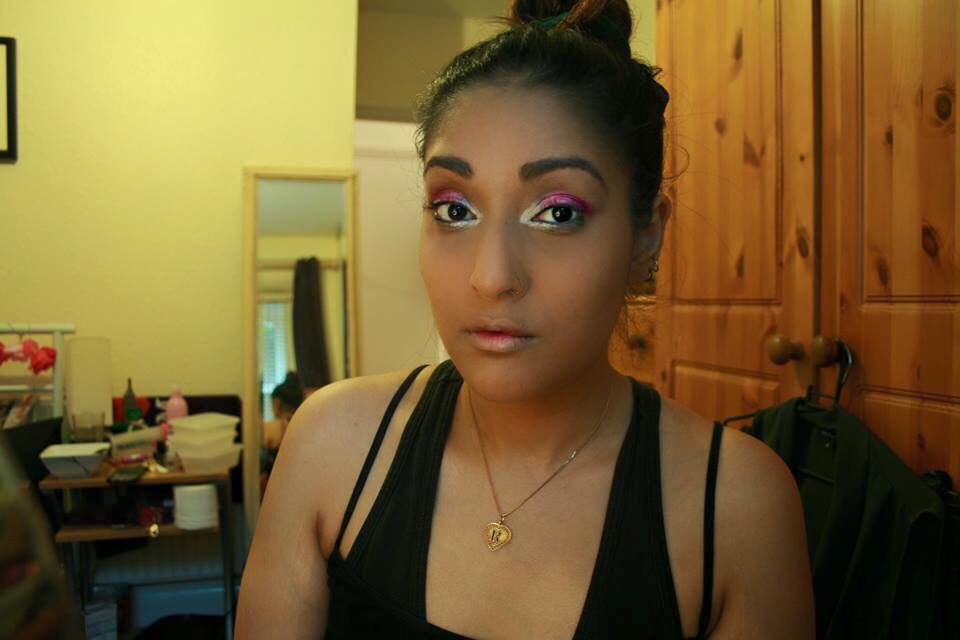 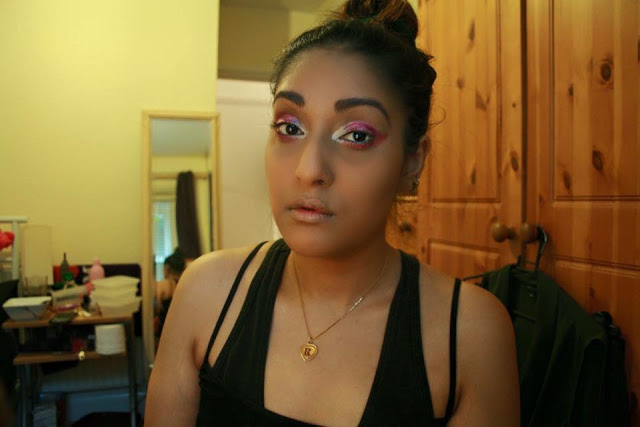 I repeated the same thing but to my lower lash line, the NYX eyeshadow pencil on the inner corner and lined about halfway along my eye – then using a hot pink to blend all the way out. 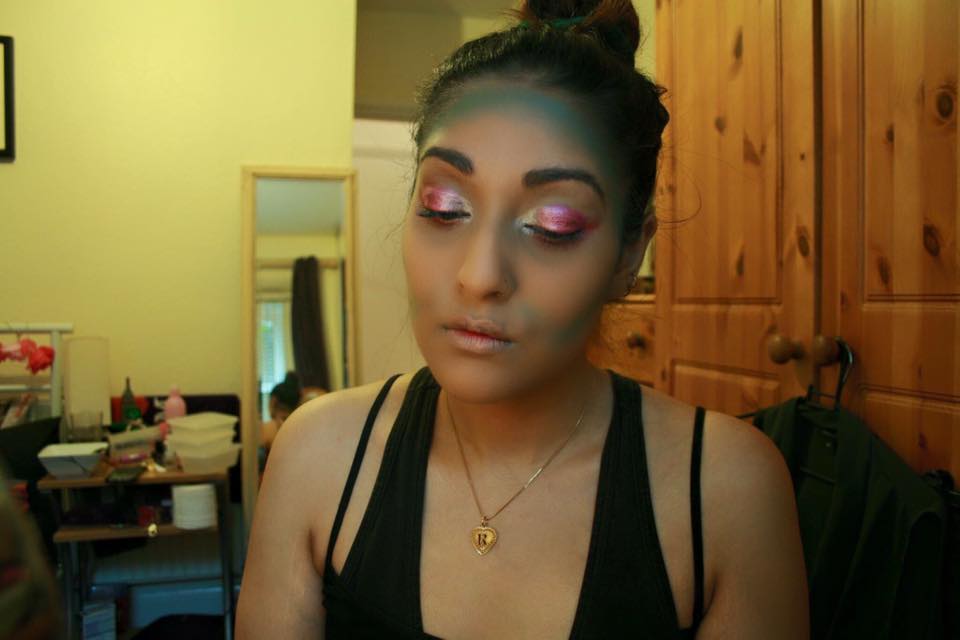 I then used a bright blue eyshadow as my contour – I lined the top of my forehead, cheekbones and jawline and blended it out – I decided to blend it out pretty far so there was a large amount of colour showing. 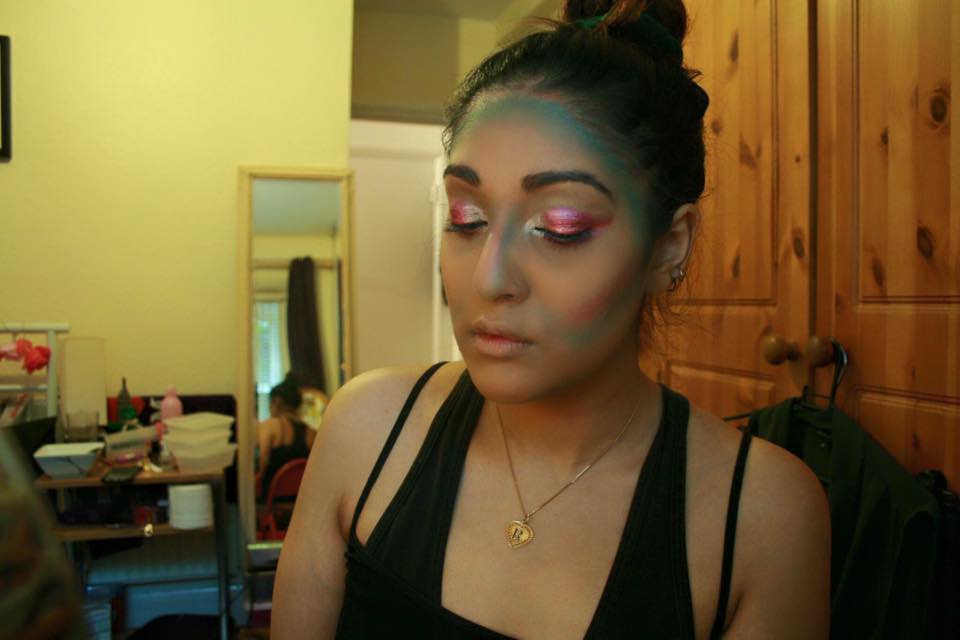 I repeated the same process with the same hot pink I used on my lid above the contour on my cheeks and blended it together. 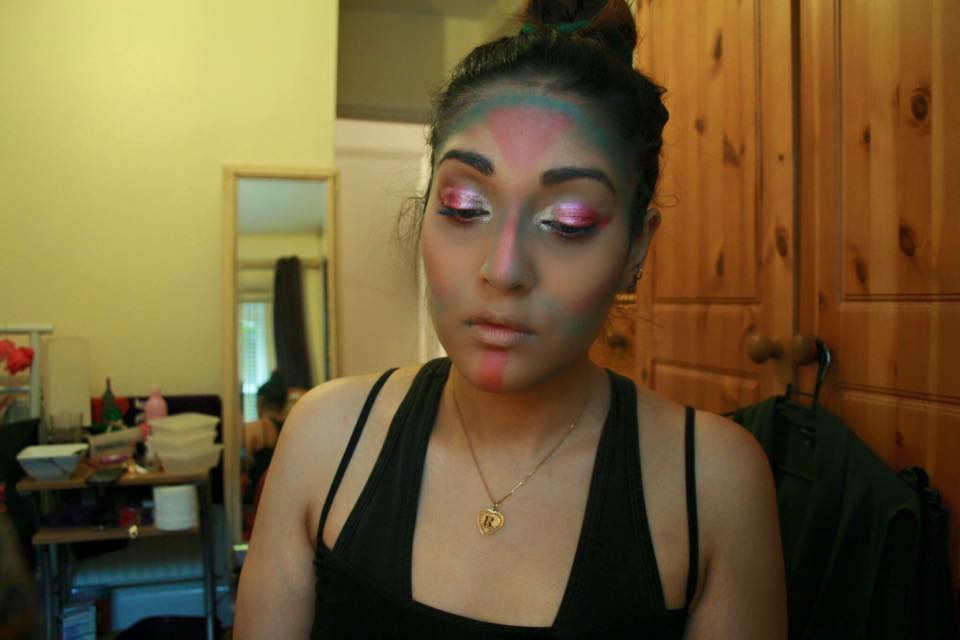 I then started mapping out the ‘alien shapes’ on my face – I decided on a triangle on my forehead, and then a strip down my nose and chin. 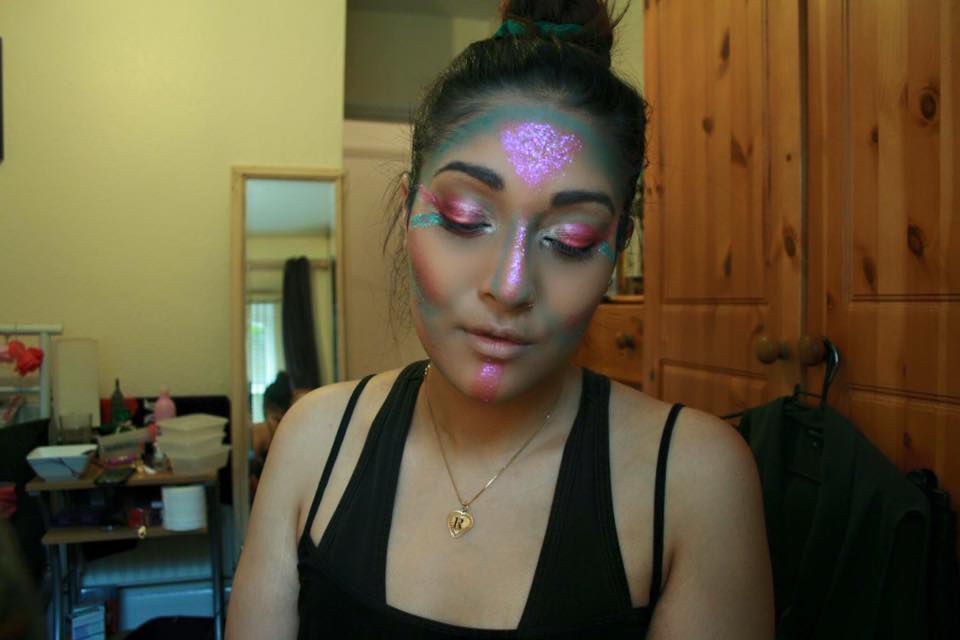 TIME FOR THE GLITTER – I added pink and blue glitter over the large ‘alien shapes’ I had drew on, and then 2 thick lines coming out of my eyes. I dabbed on some carmex/ vaseline onto the areas I wanted glitter, then using a flat eyeshadow brush, pressed the glitter over it so it stuck. I decided to add some glitter onto my cheek contour too, just to add a little bit more dimension. 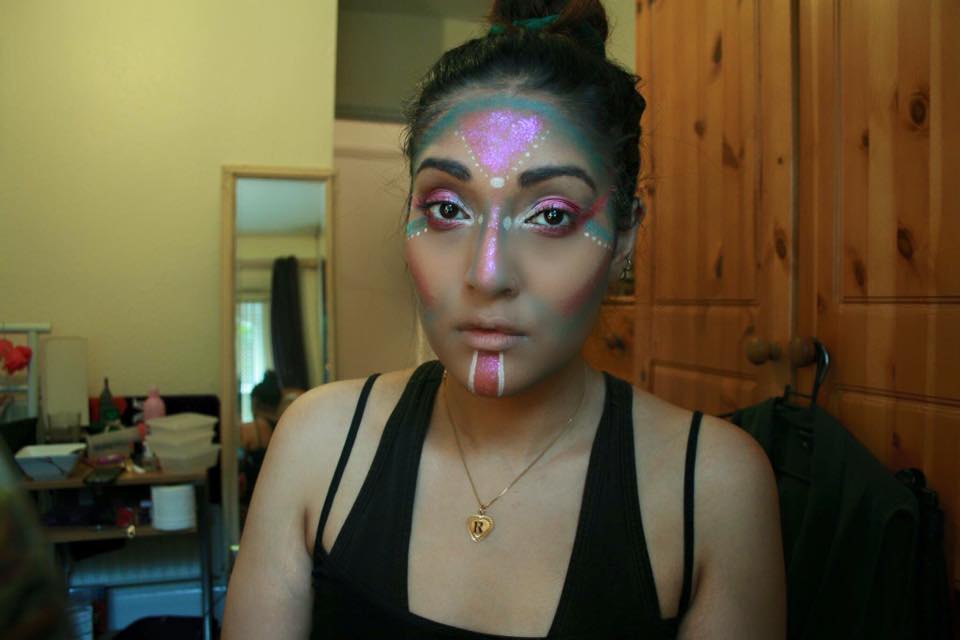 Using white liquid eyeliner I started to draw on some lines and dots. I dotted around the triangle on my forehead – the inner corners of my eyes, my outer eyes, and then lined the strip on my chin. 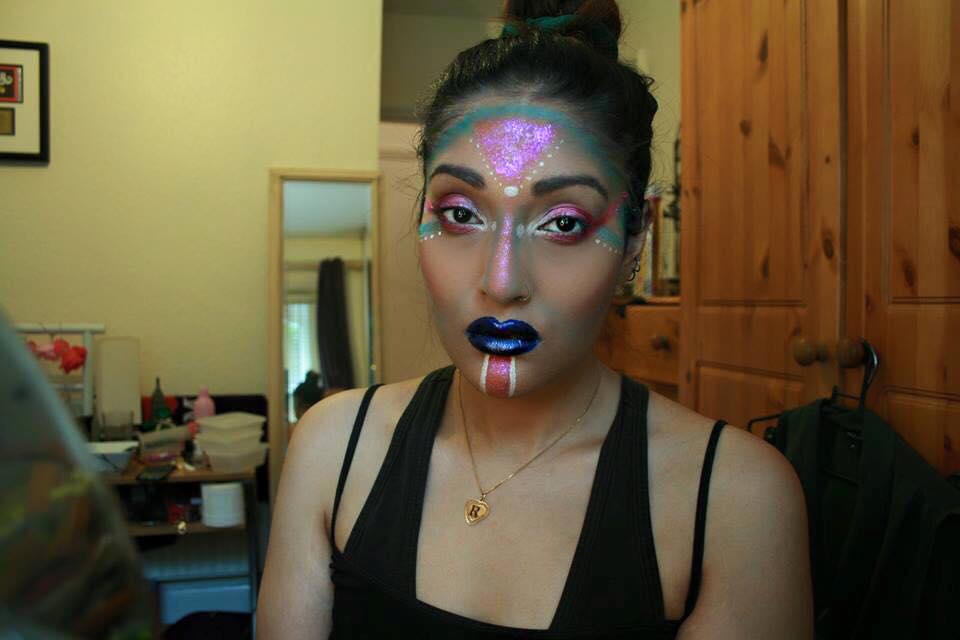 I didn’t really know what lip colour to go for, I was initially going to use silver eyeshadow, but it just didn’t look right. I opted for a dark metallic blue – I used an ELF jumbo eyeshadow stick and topped it with Limecrime’s carrousel gloss. 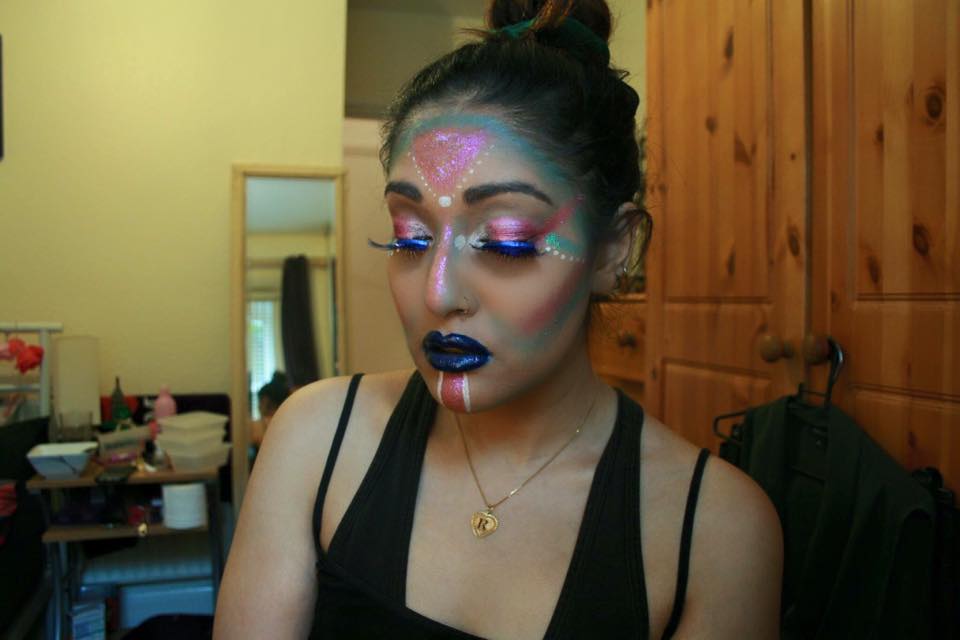 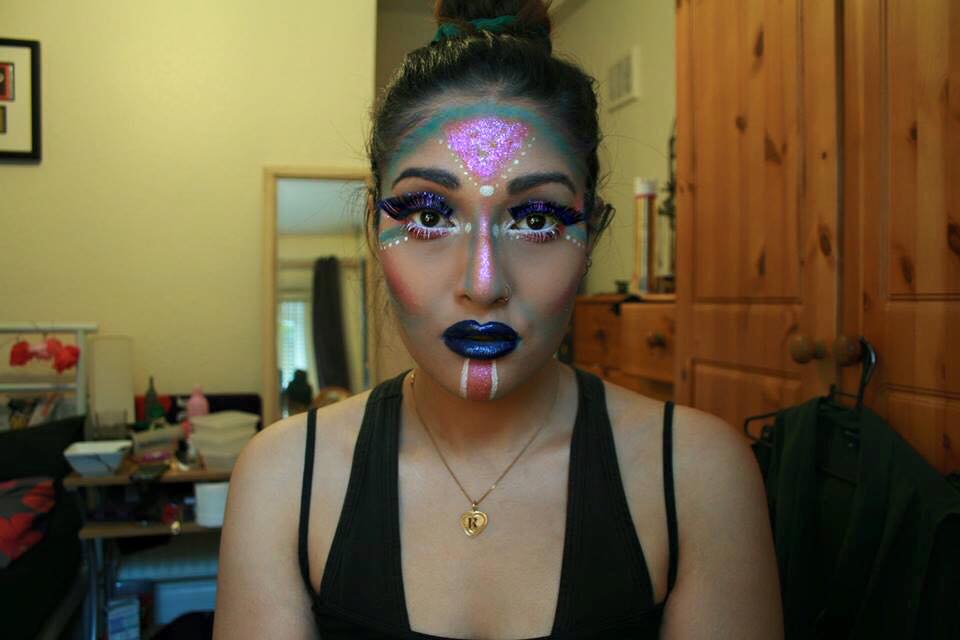 These lashes were so hard to apply! They’re super thick and had a really thick, stiff band (apologies for the poor application) but I think they really completed the look. I also finished off my lower lashes by using the white liquid liner to coat them. 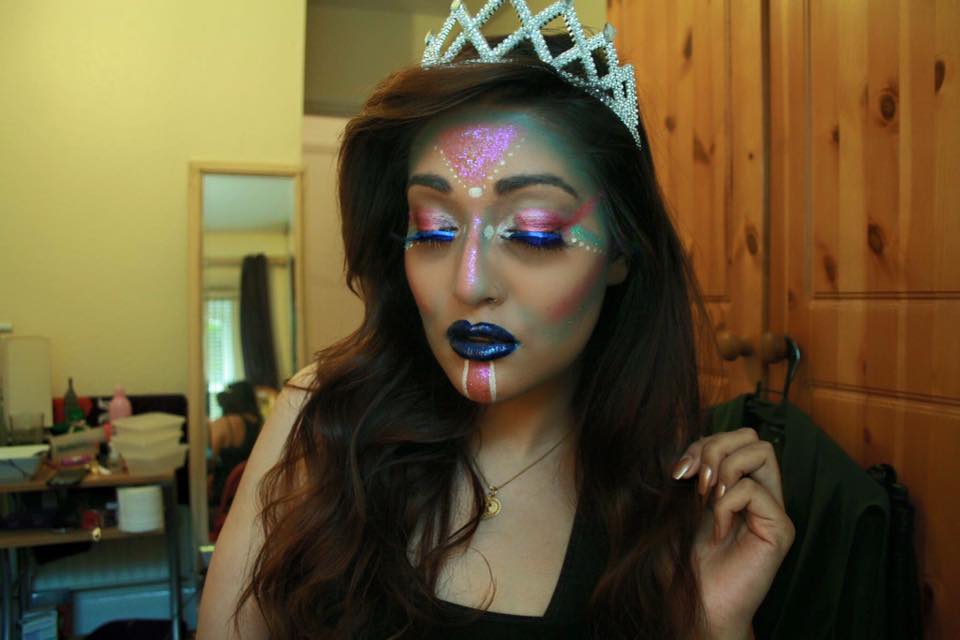 And that’s it! – Now what is an alien princess without her crown! 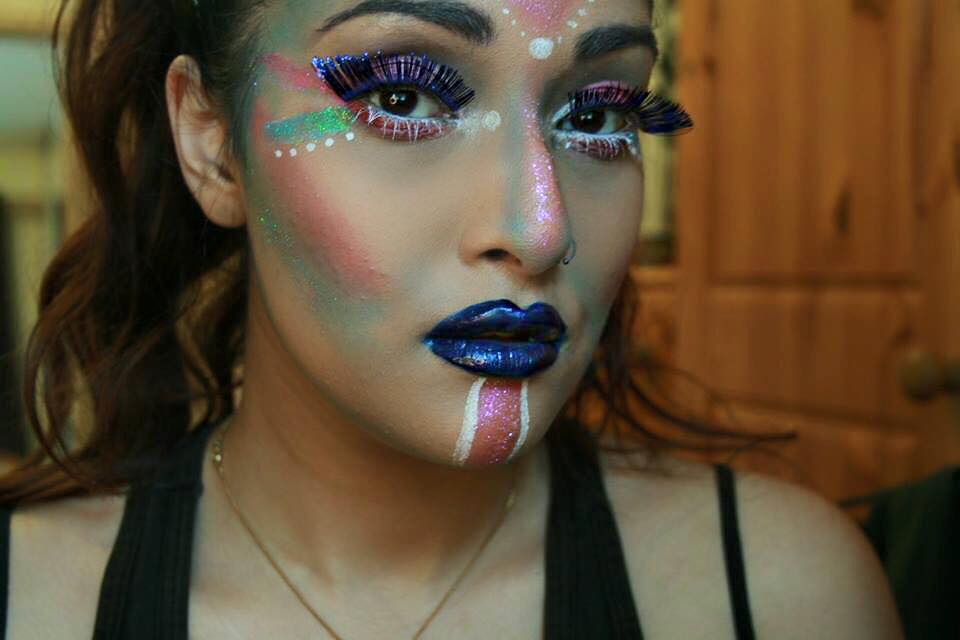 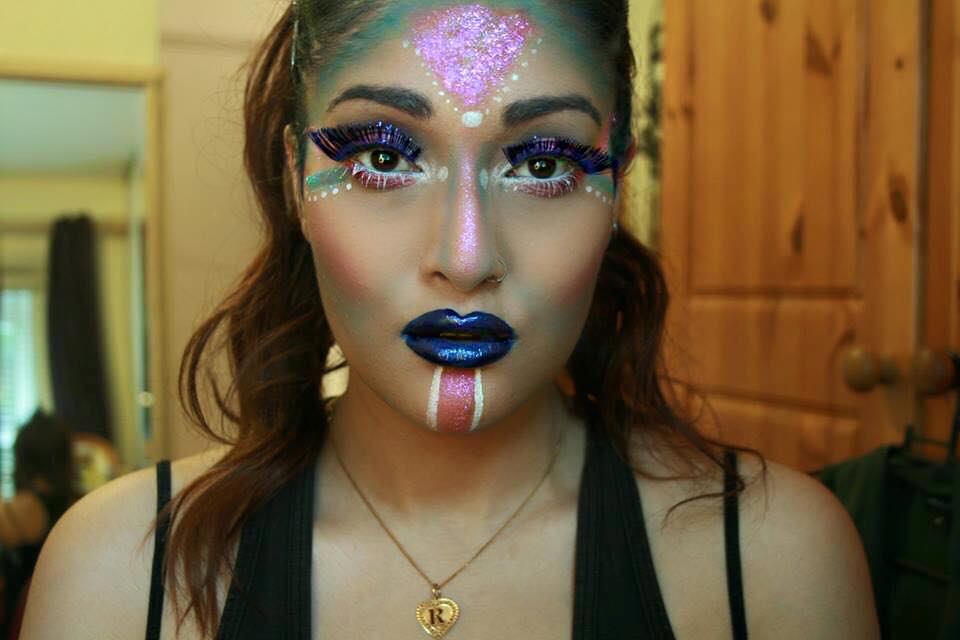 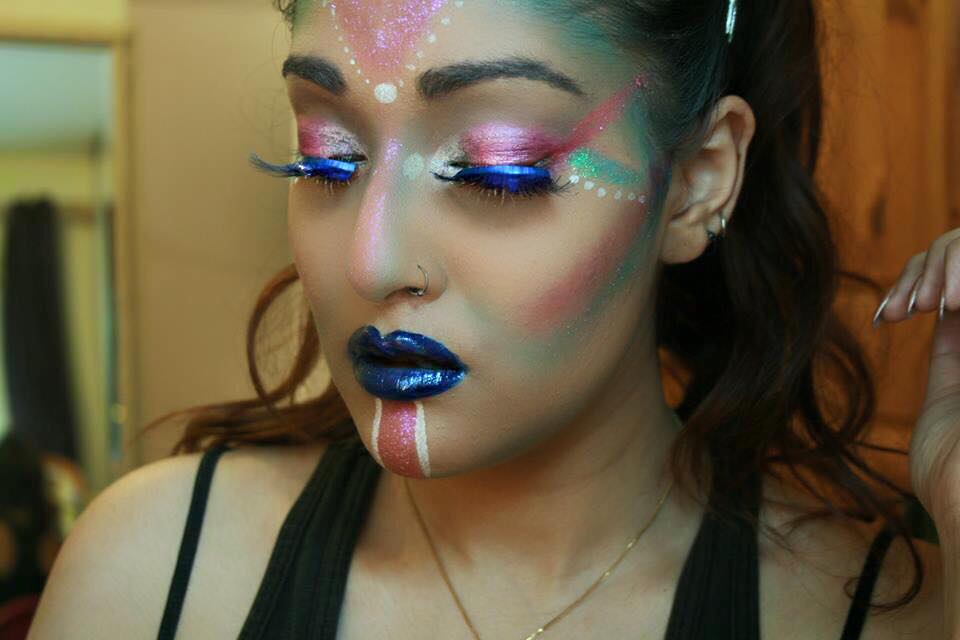 I couldn’t decide if I preferred this look with my hair up or down – I think if I was to wear my hair down I’d probably have it straight – I just don’t think it looks right with curl hair! 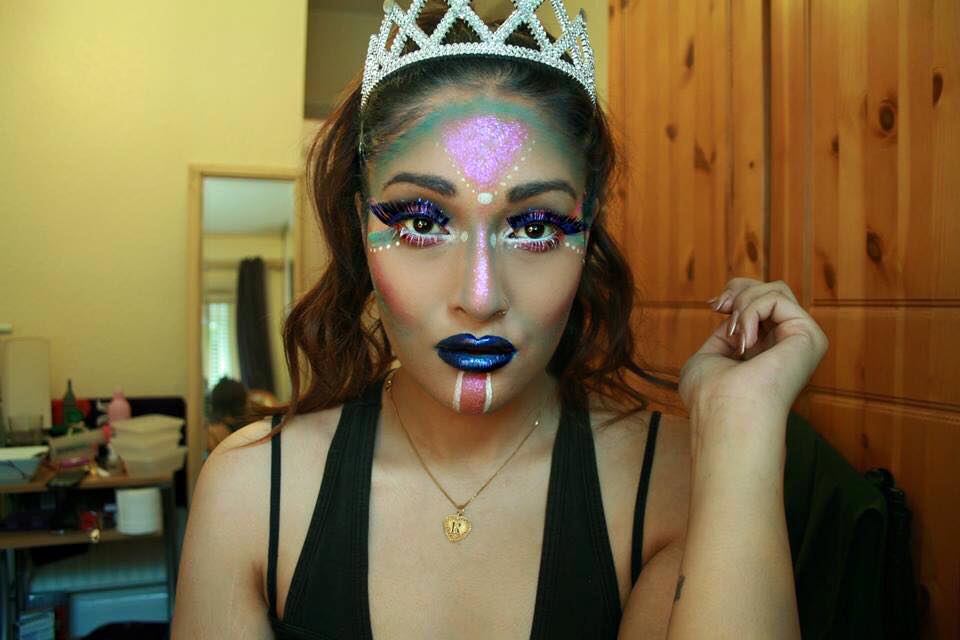 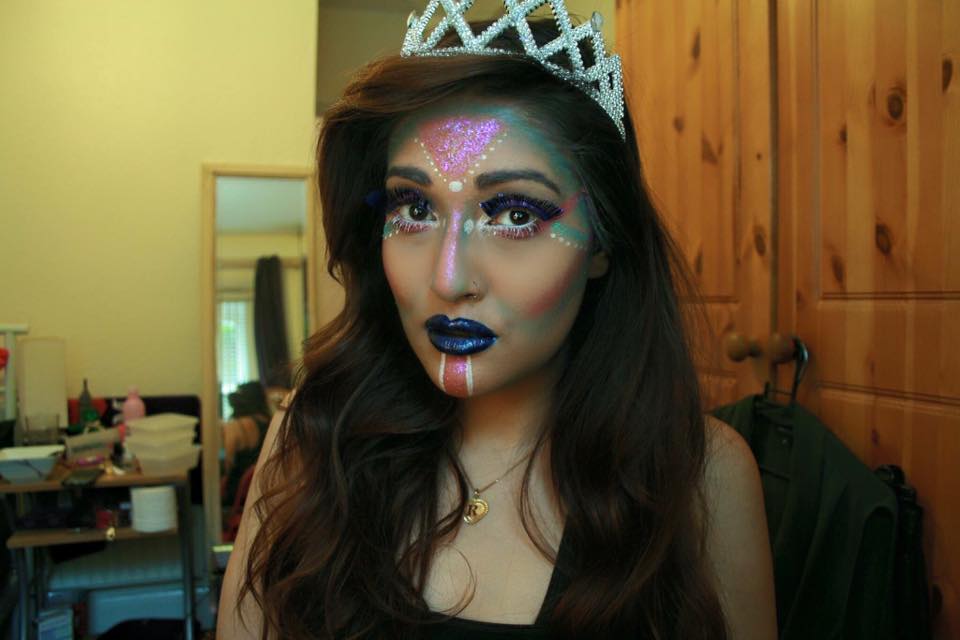 This was suuuch a fun look to do! I’m super excited to recreate this for Halloween night.

Rajane(Ram) Kaur is a 23 year old Recruitment Consultant living in London who hopes to pursue her dream of working in the make up industry  without having to work in retail or freelance.

She loves doing touristy things in London and practising make up looks. She truly believes that makeup is an art form, and will be starting a You Tube channel soon. So watch out for that 😉

I actually love the look with her hair down and curly! What do you think, would you be rocking this for Halloween or perhaps your next fancy dress party? Let us know! 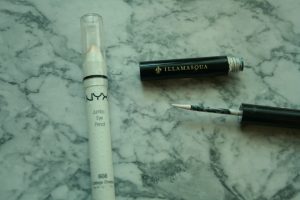 NYX Jumbo eyeshadow pencil in Cottage Cheese as eye base 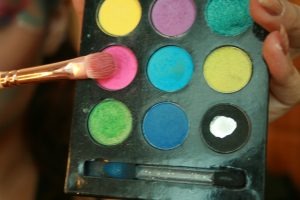 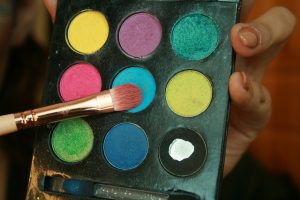 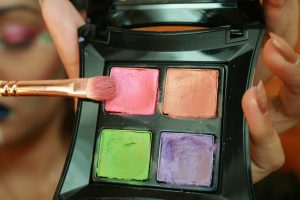 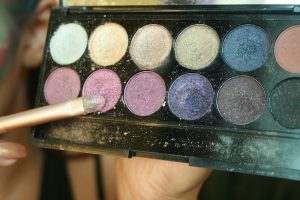 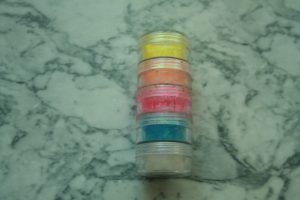 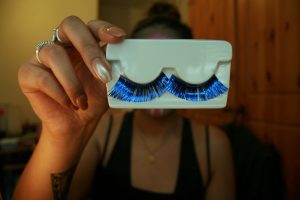 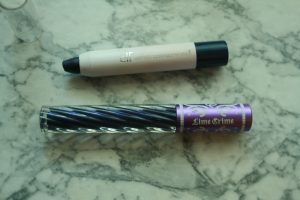 She also created a Jigsaw tutorial on her own

blog which is absolutely amazing, check that out too! 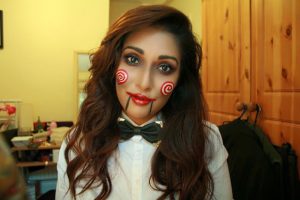