Eight years ago, a young girl left her family to travel to a far away land where she would eventually join others who had done the same.

The young girl like any other, had lots of dreams and passions; and was excited to have finally embarked on her journey. A journey that she hadn’t known at the time would change the course of her life.

One day, while at her University campus, she and her new best friend decided to go to the library instead of joining their peers in living out the infamous freshers week life. However, the knowledge she seeked, was to be different that night, because unknown to her, she was to meet the man of her dreams.

It was to be fate indeed, as that very night, another young male was in the same library, studying for his assessments.

What had began as two young people seeking knowledge in the confines of their library, turned out to be the start of the journey of a lifetime.

The young girl had caught the young male’s eye and what started as an innocent conversation between two young hopefuls, developed into an eight years long romance that finally led them to the altar.

As the years go by, and I get older, I’m beginning to see more of my friends getting hitched and making their vows at the altar; professing their undying love to their partner, sharing their first dance and first kiss as a married couple.

Dunsin and Taweh were no different.

As narrated, theirs started 8 years ago and was finally celebrated on the day that marked their 8th year anniversary! Taweh had proposed while they were away on a romantic vacation in Mauritius(They’ve got a lot to tell their kids in the future I tell you!).

What most people know or don’t know is that, a wedding can quickly turn into a tug of war just as it can leave everyone in attendance emotional and tearful, filled with love for the couple.

It is during the planning process of the wedding that the ‘momzilla’ and ‘bridezilla’ comes forth.

Trying to please a mother who has probably been planning her daughter’s wedding just as much as the daughter has been planning the big day, is no small feat. How do you compromise when both camps want to eat their cake and have it too?

Well, in the Ruhle’s case they had a double wedding. Triple really if you add the Nigerian traditional wedding to the mix!

So on the 13th of October, the couple and their entourage packed their suitcases in London, and headed for the motherland in West Africa.

The love hate relationship Nigerians and Ghanaians have for each other was void in their case. Dunsin born and raised in Nigeria was to wed Taweh a native of Ghana and all was well with the world. The festivities began in Lagos, and kicked off with the traditional wedding which took place in Lagos Island. Anyone conversant with Lagos life knows the Island is the place to be! (A note to my future husband: ‘I expect no less!’).

It was a bright sunny day as usual in Lagos and the wedding took off without a glitch, bar the late start which is no surprise when it comes to Lagos life. If you’ve never heard of African time, now you have!

Anyway, it was a lovely ceremony. The traditional rites were done and then the bride danced towards her husband and was told not to stop until he was satisfied with her dancing skills(!) Thankfully he didn’t make her dance till the end of the night! Well, we kind of did. Nigerians love after party’s you know. Some even have the after party for the after party! Yeah, it can get that ridiculous. The phrase ‘turnt up’ was made for us lot.

A day later, the Christian white ceremony took place and it was just as beautiful. I don’t know what else to say than it was a joyous and love filled affair. Don’t get me wrong, after seeing what happens at the backstage of the wedding’s management process, I can say it was stressful too! But what great event isn’t?

What mattered was the beautiful union we were celebrating.

And finally, in the eyes of their maker and witnesses, Dunsin and Taweh became the Rhules.

But you see, a girl wants what she wants, and Dunsin was going to have her dream location wedding whether anyone liked it or not. So two days after the celebrations in Nigeria, we packed our suitcases once again and headed to Accra, Ghana.

I definitely wasn’t ready for the overwhelming emotions I felt during the second wedding in Accra. The day had been so meticulously planned, and when I got to the venue, I was speechless. There was certainly love in the air. You could feel it all around you. Any adjective greater than beautiful is applicable here.

By the end of the ceremony, I was almost in tears. Yes, me, teary eyed at a wedding!

The ceremony was carefully thought out and had that quiet confidence that I love. 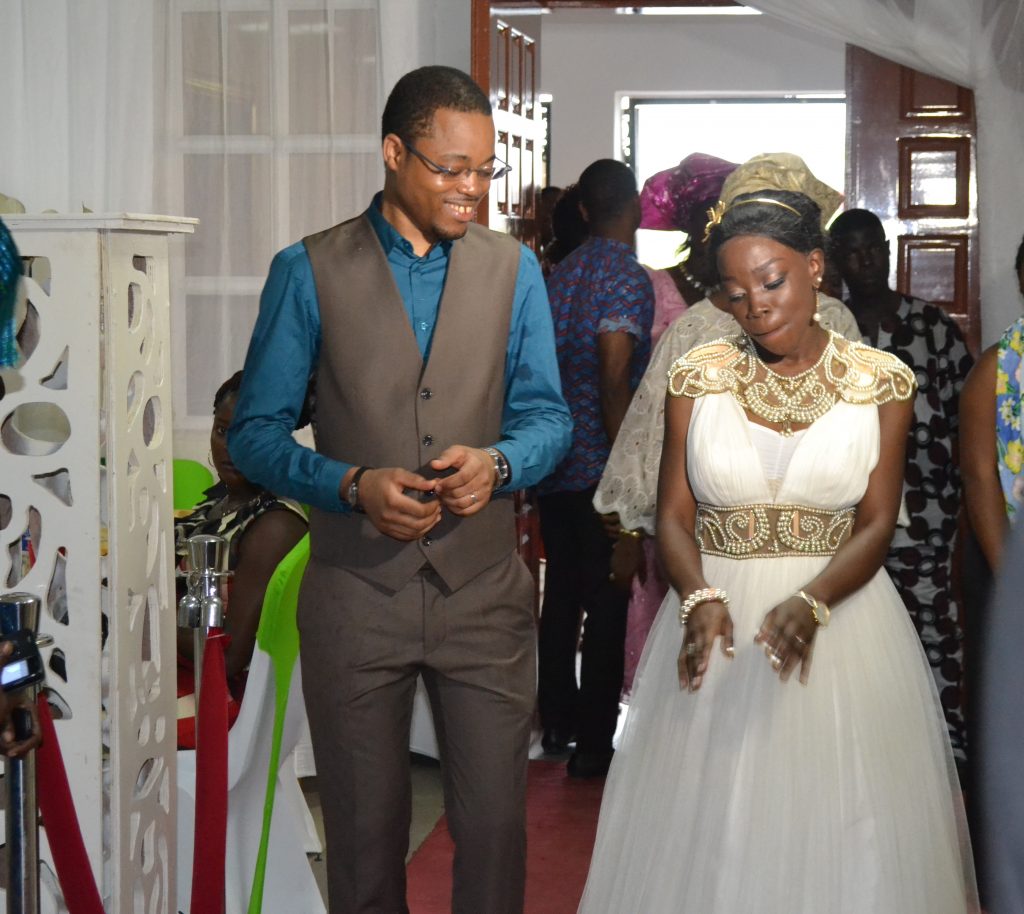 There was no  need to  brag or shout it at the rooftops. It was as clear as daylight and as true as the sky is blue.

Our love is true and pure it said.

I asked the couple a few questions and they were lovely enough to answer.

S: Is married life any different from being engaged or in a relationship?

R: Because we’ve lived together, it’s just a title to us. But it’s also an added benefit that I (Dunsin) come first now and others have to wait.; and I can’t be lazy anymore as I have to fulfill my wifely duties.

S: Do you have any advice for other people getting married soon?

R: Enjoy it. Things won’t always go right but enjoy it. For the girls, don’t lose you in the process and for the guys, as long as you remember you’re on the same team, you’ll be fine. You started together so make it a must to finish together. It will get you through the challenging days.

S: Now that you’re done with the wedding, if you had to do it again, will you do it differently?

R: Perhaps we could have been more organised, and have less stress. Yes, definitely less stress! Also, we would have loved to capture more memories. For instance, using our guest login book. We had it, but unfortunately, we didn’t get to use it. Organization could have been much better.

S: What was your best moment during the 3 weddings?

R: The Ghana wedding! It was all about us and our love.

S: Is there anything else you would like to add?

R: Never underestimate the value of good friends at your ceremony because they get you through the stressful bits and make your ceremony memorable. I am grateful for my true girlfriends, they were amazing! And the grooms men made the ceremony more fun for Taweh with their charming selves.

What a lovely couple! They are an example that true love really exists.

And if like me you didn’t find the ONE at University, not to worry, he or she is probably around the corner. They probably went to that darn freshers party instead of ‘bumping’ into you at the library! 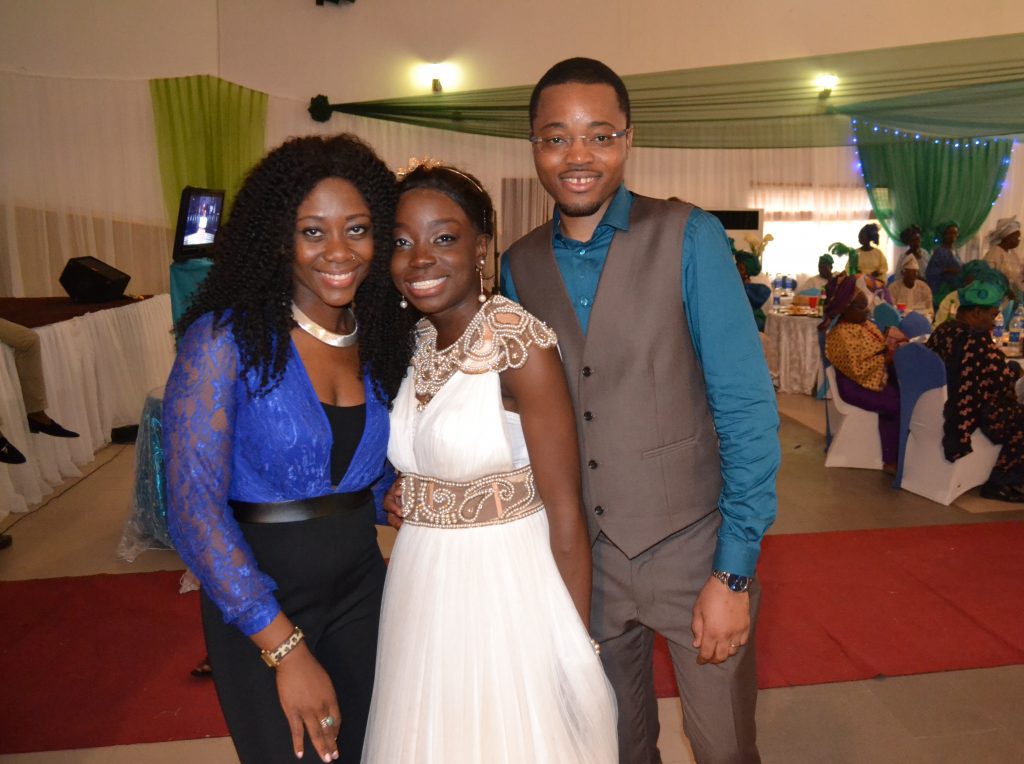