In this YAMI(Young And Making It) feature, I interviewed 24 years old Communication Officer and soon to be author Wendie Zahibo. After a solo trip to Brazil where she realised an epiphany that was inspired by her childhood experiences, she embarked on creating an illustration book for modern African/Afro descent women aptly titled Reines Des Temps Modernes(Queens Of Modern Times). She openly shares what inspired the book, her determination to see the project through even after setbacks and her excitement for the launch this month. Psss: Read till the end to find out how to get a discount!

S: Please introduce yourself and share your experiences to date.

W: Hi, my name is Wendie Zahibo. I’m 24 years old, and I’m an afro-caribbean woman. I was born in Marseille (South of France), but I grew up in the Caribbean (Guadeloupe) until I was 18 years old and now I live in Paris. Both of my parents are from Africa- my dad is from Ivory Coast and my mom, from Central Africa, but they both had to move to France to finish their studies.

When I was 18 years old, I moved to La Rochelle and then Bordeaux (cities on the French west coast) to pursue my studies. I studied at a business school with a speciality in communication and thanks to my degree, I had the opportunity to either travel to work in different cities such as Los Angeles, Chicago or Mexico. I really like to travel and I try to visit one different country every year. During that time, I had the opportunity to either work for a cultural NGO which organized free concerts in LA, or for the  record label of the Pharcyde called Delicious Vinyl in LA or for a music TV channel called TRACE TV in Paris. I love art, music, culture and I always knew that I wanted to do something in that sector but I didn’t know what exactly. So I tried different things.

During my time at business school, I became the president of the art association of the school. It was a great experience due to the responsibilities I undertook. I had the opportunity to organise a beautiful project which was a festival called “Les figures de Style” about skate culture and street art which still exist today.

I graduated in 2014 and decided to travel to Brazil for 4 months in order to discover a new culture and learn a new language before I started work. The trip was incredible and although it was not always perfect because I faced some difficulties, it was where I had the inspiration for the book so Brazil has a special place in my heart and in my everyday life.

So, for over a year and a half now, I’ve remained in Paris in order to give my project a chance. In addition to the book, I work as a communication officer for a NGO and I’m trying my best to make this dream a reality.

S: What particularly inspired the idea for Queens Of Modern Times (Reines Des Temps Modernes) and did you make the illustrations yourself?

W: As I said, the idea for the project came when I was in Brazil. I think I carried it with me for a long time, but I wasn’t ready. Since a young age, I questioned myself on what it means to be a black girl in this world. My parents always wanted me to have the same chance as any other person. So when I was younger, they sent me to a linguistic travel tutor in order to learn English and Spanish. I was always the only one or one of the two black girls in the group. It was not difficult because I’m very sociable, but I knew that being a black woman is different. So alone in Brazil(Sao Paulo), because I had decided to travel alone, where the racial tensions are very strong, I think that all those questions found an answer. Queens Of Modern Times is what I was missing as a little girl and what I want to offer to other women.

Queens Of Modern Times is a book which revives 10 African/Afro descent heroines who made history and is illustrated through modern women using poetry, photography, design and stylism. It’s the mirror in which black women become aware of their beauties and their culture.

While I was in Brazil, I wrote the text and the different poems, but it took some time to realise what I wanted to do with the text and what I would call the project. Then when I went back to my parent’s house in Guadeloupe (Caribbean) for 2 months, the name Queens Of Modern Times (Reines Des Temps Modernes) came to mind. And that’s when I decided that I needed to go back to Paris to meet the right people in order to give life to the project.

In February 2015, I met an artist called Yohan Pedre who is a graphic designer, painter and a lot of other things. I presented him with the project and he automatically said yes. That’s how we created the RTM(Reines Des Temps Modernes) team- a photographer, a stylist, hairdressers, makeup artists, 10 models and I was the artistic director. I’m so proud of what we’ve done together. It’s exactly what I wanted. 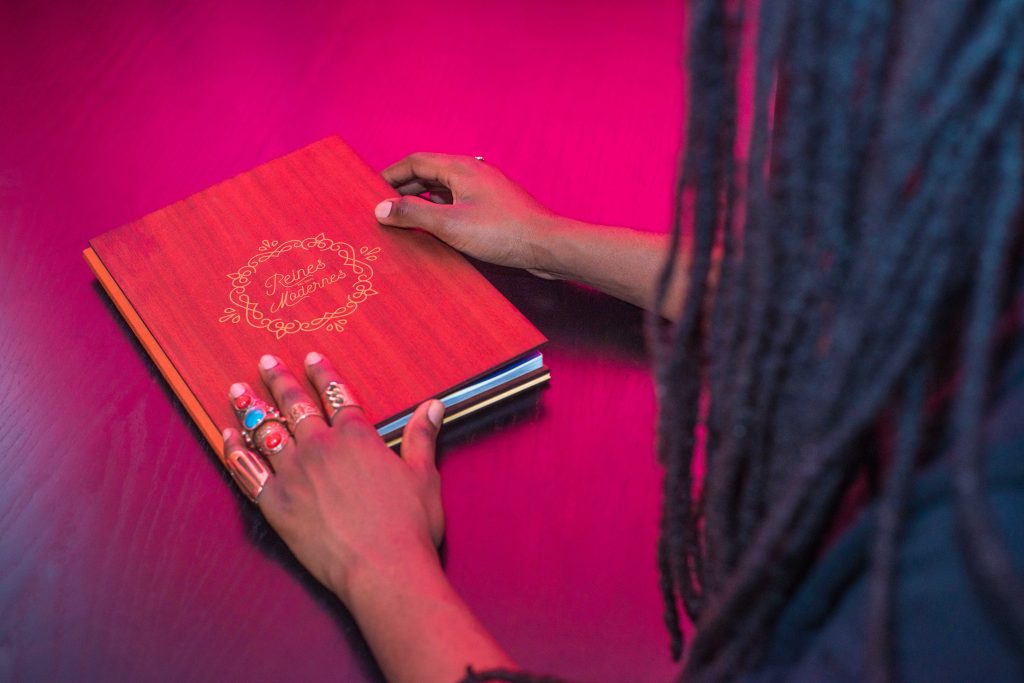 S: The concept of the book having a wooden cover is unique, why so? And was this important?

W: Yes, it’s very important because for me Queens Of Modern Times is more than a simple book. It’s a piece of art that I want to make accessible to a large number of people. The wood for me is the connection with nature and nature is very important in African culture. It’s a way to be connected to the world. I worked with the carpenter for all the pieces.

However, the book will be available in two editions. One with the wood cover and another in woven textiles. Two different experiences in the texture, two different prices obviously but for the same content and the same quality. All of the books are handmade. 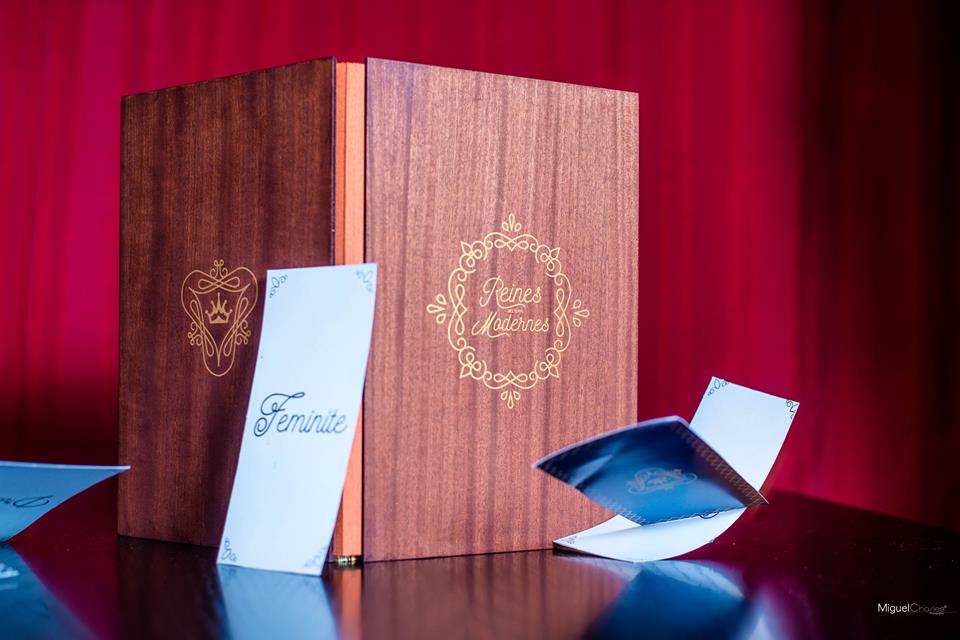 S: Have you always wanted to be an author?

W: I have always written but it was never as someone who wanted to be an author but as someone who needed to express her feelings. I’m very sociable but concerning my feelings, I hold back everything. Since I was little, writing was a way for me to externalise. Today, I just consider it to be that I have something to say and perhaps, it may interest other people. So I’m trying because I want to give myself a chance. It’s not easy for me to call myself an author. It’s my first project. I’m a “little lady” (as said by the artist Mali Music) who wants to try to say something and who chose writing and art to say it.

S: What has the process been like since the birth of the idea to almost launching it fully?

W: Intense. In a year and a half, a lot of things have happened, but everything has been love, positivity, experiences and meetings. And I love it! 2015 was the year of the creation of the book with the shooting, the text, the design and the prototype. 2016 is the year of the launching. So now the challenge is to make people aware of what we’ve done and to make it available ☺. 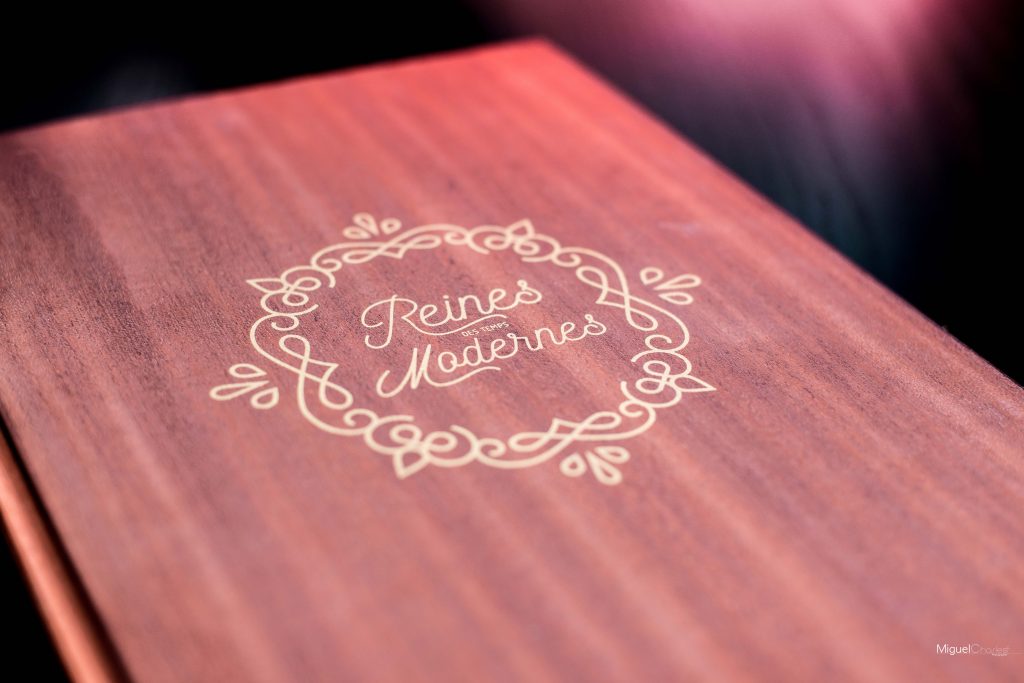 S: Have you experienced any challenges and/or drawbacks?

W: Yes. At the beginning I didn’t realize that it will be a long process. I thought that in one year we would have done everything. The biggest challenge was to be patient and to understand everything that was happening. I think that everything happens for a reason so I always try to stay positive (it’s not always easy).

I tried a crowdfunding campaign in January in order to self publish 250 books. Unfortunately, we didn’t succeed in reaching the amount that we wanted. It was 40 intense days of campaign. This took a lot of energy and it took me some time to get back in the game, but I learnt a lot thanks to it. I’ve had the blessing of having a great team, an amazing family and some few incredible friends who always encourage me. So now I’m ready for some new adventures. There is a quote, which said “Nobody can take what is yours”. I think it’s true. If something is made for me and I’m working hard to get it, it will happen no matter what. 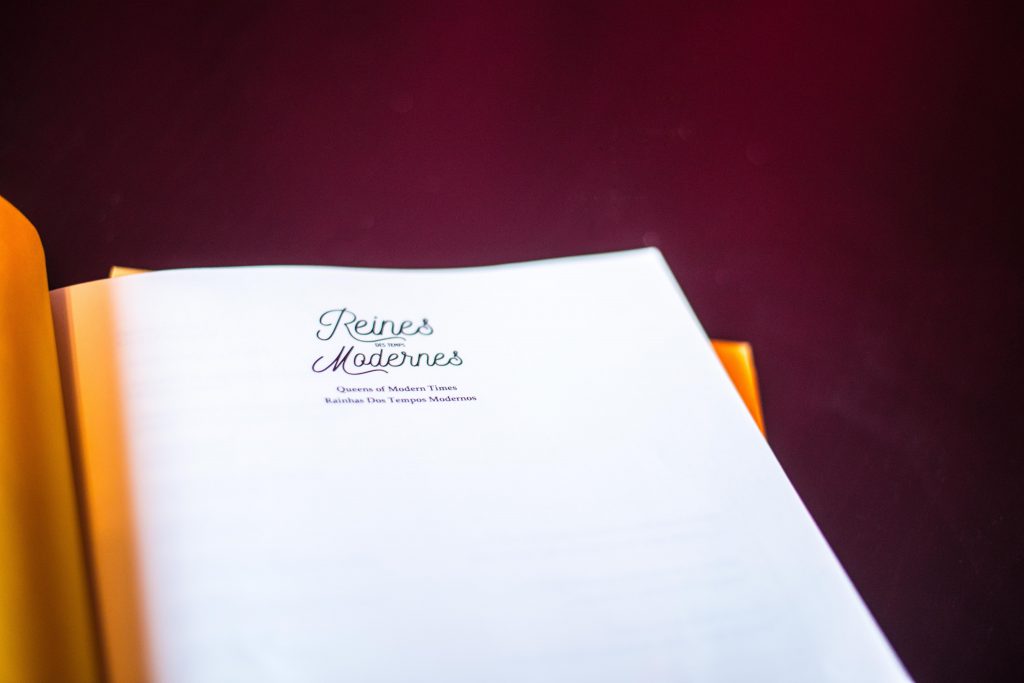 S: With what you know, what would you have done differently?

W: Nothing. I really like the process more than the result because it’s during this time that I learn. If everything happened this way, then it’s for a reason. I just want to be honest with myself, work hard and let the opportunity happen.

S: What are your highlights so far?

W: The launch of the crowdfunding campaign on kickstarter because it was when I really started to communicate about the project and let people know what we were really doing.

Another highlight was at my first exhibition on the 16th of March during the MATTER exhibition organised by an agency called Make It Clap when an artistic director called Tiyi Kalmery believed in our project. I never thought that I would ever exhibit so it was a beautiful experience. During the exhibition, some of our heroines were brought to life thanks to a role play with the models and the photographs.

Also, a highlight was an event called Food & Book that we created with a restaurant called “The Creole Bistrot” at the end of the crowdfunding campaign in order to thank the people who supported us since the beginning and even after. It was very intense because it was the first time that I experienced live slam poetry. I had the opportunity to do it with a talented artist called Freepon and it was a beautiful moment.

In addition, a youtube programme that we created called #ReineDuJour (Queen Of The Day) where I interview ambitious and determined women in order to show to the world that there are queens everywhere was a highlight. I loved the exercise. 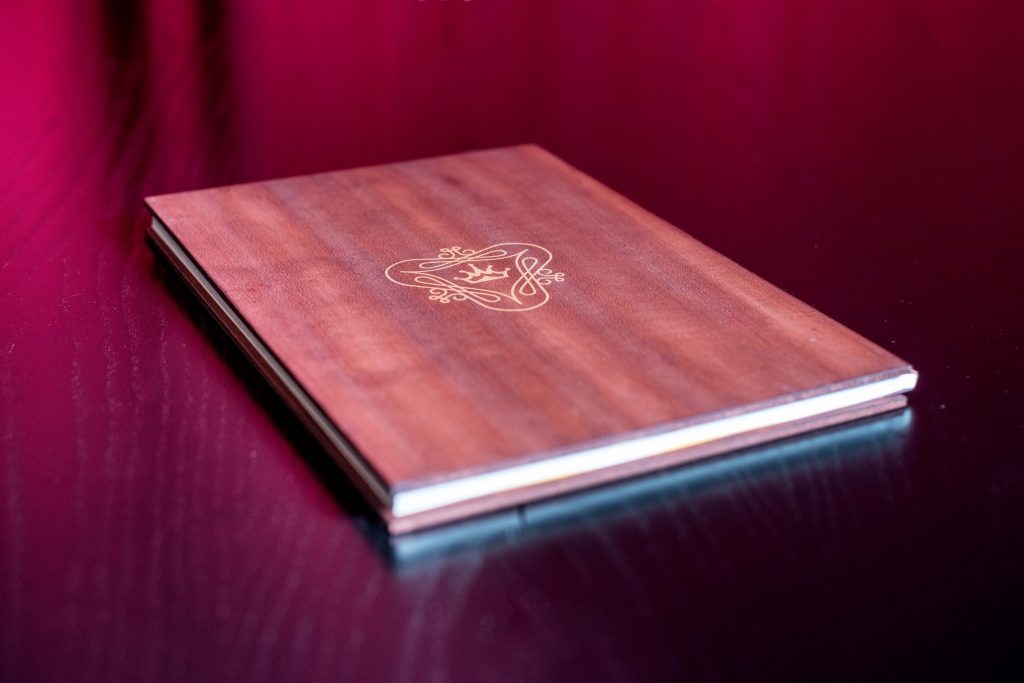 S: What do you hope your readers take away from the stories?

W: I hope that they will understand the book as a mirror. So that every time they feel less confident or any time they want to make someone else feel confident, they’ll open Queens Of Modern Times and read the story of those great heroines and say to themselves: I’m beautiful, I can be proud of who I am, If I have something to say to the world I need to  say it, I’m a queen who wears her culture and her history as a crown. 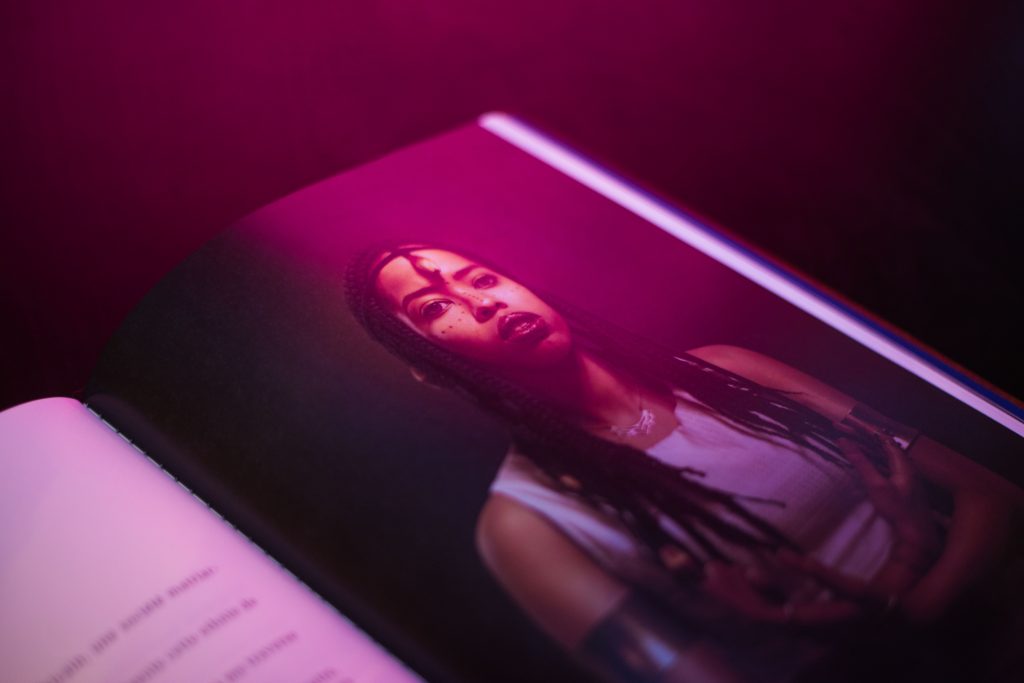 S: Where can the book be purchased from?

W: I’m currently still working on the website http://www.reinesdestempsmodernes.com where people will be able to purchase it from. The website will be fully live soon, but for now people can register on the website in order to get a reduction on the price.

W: Enjoy the process even when it seems hard as it’s just experience. If you have an idea that can’t leave your mind, give it a chance. You never know. Life can be so short. We don’t have time to have any regrets. And as I say in French: Coeur Coeur  Love! (heart heart love) 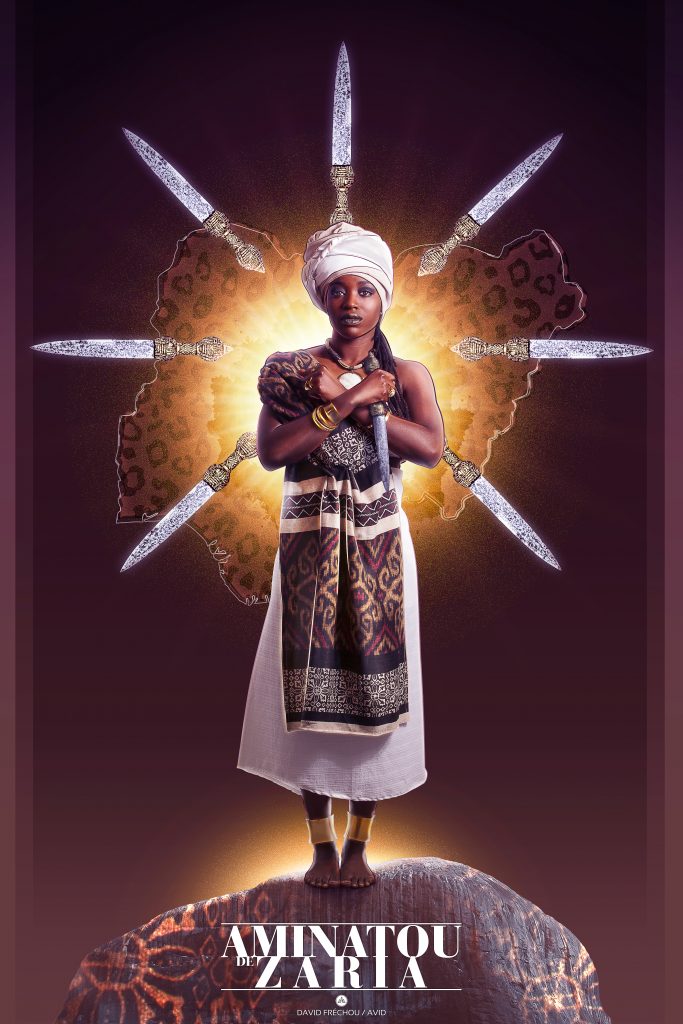 I can’t wait to get my hands on the book! And I hope Wendie’s story has helped to inspire you on whatever your heart’s mission is.

Learn more about the project by following the links below and don’t forget to register for your discount code!