It took me a while to make this post. Not because I didn’t know what to say, but because I wasn’t sure of where to start, how much to cover or even if I wanted to.

Do I glaze over what I know about the history of slavery and colonialism and add a few pictures at the end to make it cute and light hearted or do I go in for the bull’s eye?

I’m still not sure, so I’ll proceed anyway and let my thoughts guide me.

You see, the transatlantic slave trade isn’t a small thing to be poked with the end of a stick and quickly cast aside. I can write a lengthy article to no end about what I’ve come to understand and in some ways the post-colonial mentality that we Africans, and the world as it is today still carry. But that’s not what this post is wholly about.

I could begin by saying how the education curriculum in West Africa has failed me (I cannot speak for the whole of Africa as I don’t know what is being taught in the other parts). It took me 17 years to leave the shores of the motherland and another 4 years before I finally started to grasp the magnitude of the world’s history. Not just about slavery, but so much more. I’m still learning and in no way at the peak of my education, but such is life. An endless learning journey we go through till we cease to exist; and even then, who knows.

I once wrote a riddle that goes- I’m something, you exist while I do not. But as long as you do, I’ll be the wiser. What am I?

Can you guess the answer? Don’t peek. Think for a moment, and if you still can’t, read the next line.

Yes, as long as we are still living, the dead would be the wiser. Only they can know if it’s truly the end. If there’s an afterlife. Heaven? Hell? Reincarnation? You name it, they’ll be the wiser.

Anyway, I digress. Let’s move on to what this post is really about. So while I was in Ghana about 3 weeks ago, I visited Elmina Castle. If you’re not familiar with it’s geography, I’ll help you out. Simply put, it’s next to the coast. It shores carries you to another land. A land where hundreds of years ago, other humans were chained and caged, taken away to be hostages of another man.

Elmina castle was first built as a trade settlement by the Portuguese, but later became an important stop on the route of the transatlantic slave trade. It was later seized by the Dutch and then finally, was under the possession of the British empire.

When I arrived at Elmina Castle, I wasn’t sure of what to expect of its remains. I never looked it up before going, so I let my senses guide me. Remember I said the education system I was brought up in failed me? Yeah, let’s go back there. So how was it that such a huge part of my history was never taught? Let’s not even talk about the World Wars and the part Africans who at the time were colonised by the British played in the affair. I vaguely remember going to Badagry in Lagos, Nigeria when I was in primary school and shown around where our ancestors had been subdued and chained; awaiting their future as slaves in faraway lands.

But sometimes, I even wonder if my visit to the site is a figment of my imagination. That’s how rare it was to have been taught any part of my history.

Anyway, my visit to Elmina castle was eye opening. Learning more about what happened during the slave trade on the coasts of West Africa was like placing the piece to a puzzle. Finally I wasn’t only reading about what had happened, but could also see for myself the kind of conditions that it was; not that that was needed to justify anything.

I’m rambling a bit,and my thoughts can go on forever, branching out into different sphere’s of realizations, so I’ll stop here.

So what’s the point of this post? Well, I’m deciding to share this experience, as I have the others from my visit to Ghana. I believe the trip will remind me of our humanity and how we must take care of one another so such an atrocity never occurs again.

Inside the inner courtyard of the castle

We were told that an African-American who had just visited the site left this.

The room were ‘stubborn’ people who tried to run away were kept and starved till their death. Left as an example to anyone who thought about escaping.

The steps that led to the White master’s bedroom. In the cover of the night, they picked one of the female slaves, led them through the trap door and raped them.

The entrance to the room of no return.(Once a slave got there, slavery was inevitable)

The point of no return. 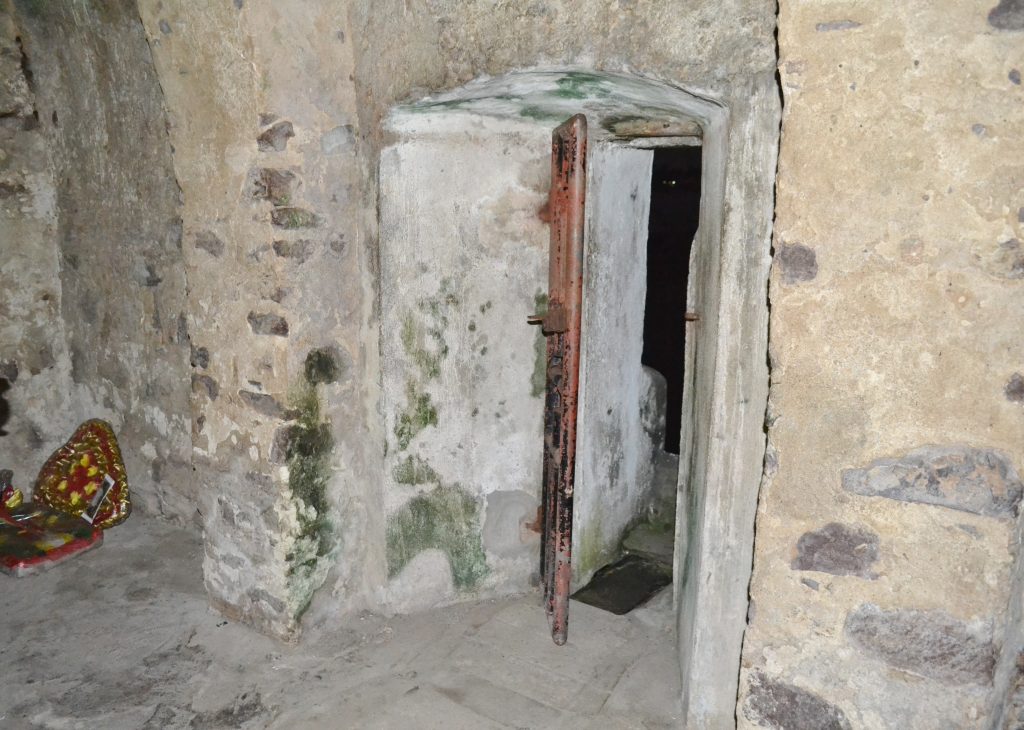 But still, I weep for those who’re still shackled in their minds. It will take generations for what was done to be undone.

Till then, we live and pray.

2 Comments on Elmina Castle & The Point Of No Return