The O2 Academy Brixton has been host to many a concerts, such as those of greats like Madonna. Even world renowned artiste Lauryn Hill will be gracing its stage next week. Therefore, it comes as no surprise that Europe’s largest African music festival – Africa Unplugged will be joining in the ranks of such great performers to be hosted there.

African music and groove is no mystery to the modern world, and with young hit makers and veterans alike currently taking the world by storm, a music festival to celebrate the industry’s ever ascending accomplishments, stars and musical history is much needed. African music legends like Fela would have loved to see this day!

This year,  Africa Unplugged is kicking off in London at the O2 Academy Brixton on Sunday 14th of September and will conclude on Sunday 21st of September at The Ritz in Manchester, featuring over 10 artist and catering to about 7000 attendees

The festival aims to create awareness towards the issue of child trafficking and child abuse in Africa. This was chosen to commemorate the missing Chibok girls in Northern Nigeria. 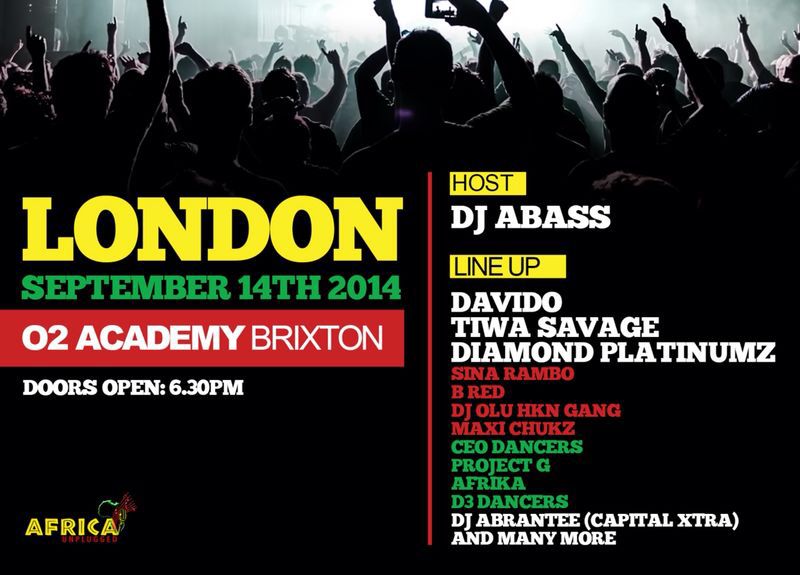 It be hosted by legendary DJ Abass and Capital Xtra’s DJ Abrantee. Africa’s hottest stars and winners of MTV and BET awards Tiwa Savage, Davido and Diamond Platnumz will be headlining the event. Other newcomers representing the diversity and richness of Africa such as Britain Got Talent’s CEO Dancers, Project G, Mazi Chuks and many more will also be performing.

The festival will be an avenue to showcase Africa’s rich culture, diversity, creativity and unity through music, comedy and dance.

Go learn about the one Africa. The real Africa.

Watch 2012’s concert to get a feel for the amazing show that is to come!